Which Embryo To Transfer?

Criteria For Evaluating An Embryo

Clinics will often use two or three criteria to determine which embryo is best and should be transferred first. These include:

How Fast The Embryo Is Dividing

Most experts will tell you that the speed at which an embryo reaches any given stage (like the blastocyst stage) correlates with its odds of success. Below is data from over 1,000 transfers of frozen-thawed embryos with results broken out by the day the embryos reached the blastocyst stage. As you can see, embryos that reached the blastocyst stage in five days were more likely to lead to a birth. But, embryos that reach blastocyst in six days clearly have the potential to lead to births. For patients considering transferring cleavage stage embryos, the same holds true: the earlier the embryo reaches that stage, the more likely that it will lead to a birth. 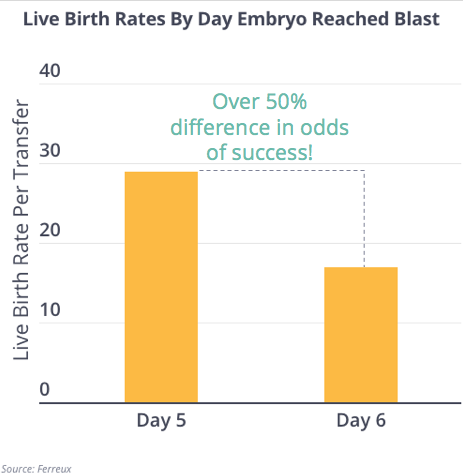 As an aside, while embryos reaching blastocyst on Day 7 are less desirable than those reaching by Day 5 or Day 6, a small but growing body of evidence suggests Day 7 embryos can also lead to live births and should thus be frozen for use. Today, most clinics discard embryos that don’t reach the blastocyst stage by Day 6. We believe that may be a mistake.

Patients often have their their embryos graded on a scale that includes one number followed by two letters (like 4AB). This is called a morphological assessment. This combination of numbers and letters represent how “expanded” the embryo is, how many cells comprise the inner cell mass (which develops into the fetus) and the trophectoderm (which develops into the placenta). 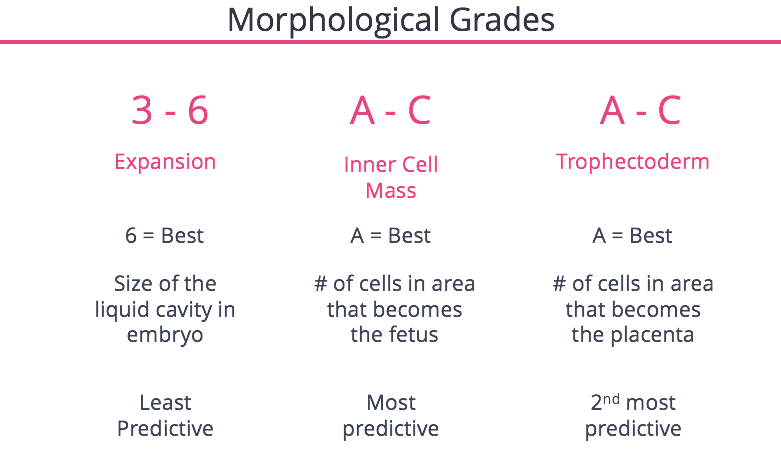 While “expansion” is listed first, it’s not the most important grade. That distinction belongs to the grade for inner cell mass, or what will become the fetus. An analysis of over 500 embryos at the University of North Carolina revealed that grading of the inner cell mass is most correlated with an embryo’s odds of success.

A critical question is, taken together, how well do these three morphological scores correspond to the likelihood an embryo will lead to a live birth? That can be difficult to assess because weighing and lining up various grades within 3 differing criteria is subject to interpretation (for example, is a 3AA better than a 4AB?). However, most studies that have tried to do this come to two conclusions:

Below is an excellent analysis from Japan of over 1,500 embryos in which embryos are classified into six buckets by their morphological grades. As you can see, there’s a predictable downward slope and thus correlation between morphological grading and the odds an embryo leads to a live birth. Yet, the less attractive embryos can still lead to live births, especially for younger patients. In fact, the better-looking embryos from a woman over age 38 typically succeed as often as the less-good-looking embryos from a woman under 33.

As many experts will tell you, grading the inner cell mass and trophectoderm is subjective and some laboratories are tougher graders than others. That makes it hard to generalize how often an “AA,” “AB,” “BA,” “CC” (or what have you) embryo will lead to a live birth. Also, for this reason, it can be helpful to get an image of the embryos in case you want another laboratory’s take on which embryos are most promising.

As we’ve covered before, genetic testing of the embryos can be an effective method to rule out embryos unlikely to lead to a live birth. While there is evidence that chromosomally-abnormal (“aneuploid”) embryos have led to live births, it’s very uncommon. For that reason, embryos that are chromosomally-normal (“euploid”) should be the clear priority. However, the vast majority of patients do not have genetic testing of their embryos done and so this information is only available to those prepared to pay about $5,000 for the results. 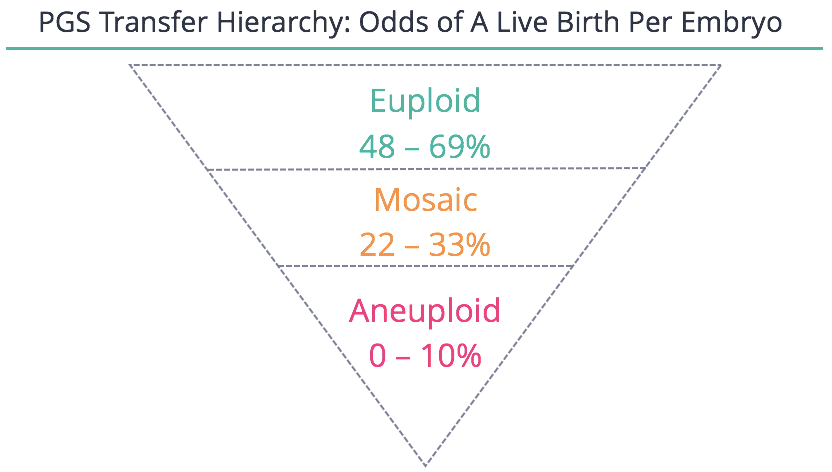